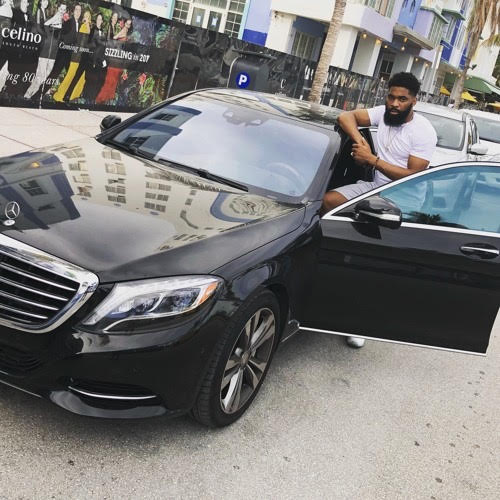 The name “Day Parkay” smoothly rolls off the tongue and is just as powerful as the man behind the name. So when you hear the name, see the man, and experience the music, you have no choice but to recognize this fact: you’ve just encountered the most real of the real!

Born in the incomparable Bronx, NY to Nigerian parents, David Mofunanya had his share of black culture and loved everything about it – especially the music. At a young age, he moved to Englewood, NJ, and grew up there with 4 other siblings. Sports became a full-time hobby that took up the majority of his time. It even led him to be deemed as one of the top ball players in the state. But not only was David known for his basketball talent, but he was also known for his rap skills and authentic freestyle ability. And that alone made him popular and well respected, no matter where he went.

David didn’t care where he was when the lyrics hit him; he just effortlessly released them and let whatever happen just HAPPEN! He could have been in the park with his boys or pumped up in the locker room after a win. Inspiration always seemed to find him, no matter who was around. But then life took a turn; it was one that wasn’t as favorable as he desired. Yet it still awakened him in a way that was least expected.

Making it to play basketball in college, David was one day faced with being kicked off the team. Basketball and music had been his life. So now that one portion was taken from him, depression decided to come in and attempt to take its place. But instead of welcoming the depression, he tried hard to fight it. So much so that he ran to music, which consoled his mind and boosted his self-esteem. And from this, his first mix-tape, “Hoop Dreams Deflated,” was birthed and became available on DatPiff.com – a very well-known site for mix-tapes and learning more about up-and-coming artists in the Hip Hop Community. Upon release, the love from his city was unexplainable and that was the official birthing of Day Parkay and his music career.

He then went on to a 2nd mixtape that was called, “Ghost of Karlton Hines.” This catapulted his career and expanded his fan base like never before. The streets were walking, the city was talking, and the right people heard it. In fact, Vado (another rapper that Day looked up to) got wind of this young star and gave him the opportunity to collaborate on a song. This was a defining moment that made Day realize he was meant for this. So with hard work and dedication, with focus and resilience, with genuine and raw talent, the journey began and is still in progress.

Like many of the other greats in the rap industry, Day Parkay attributes his love for the music to icons like Biggie Smalls and Jay-Z. DJ Khaled says he pinches himself every time he hears JAY-Z’s ‘God did’ feature. One of his favorite songs growing up was Biggie’s “Juicy” and Day has been quoted as saying that this hit made his “soul dance.” From the “Juicy Fruit” song sample, originally recorded by Mtume in 1982, to the way Biggie spoke his life through swagged lyrics and a potent melody – it all touched Day Parkay to his core. And he certainly can’t leave out the methodical movement of Rocafella. Feeling the pain in the words of Jay-Z’s “Some How, Some Way,” it was evident that soulful sounds were a magnetic pull for him.

Diplomatic Immunity and College Drop Out were also major inspirations with beats that pulled you in and made every part of you become in sync. Day Parkay also humbly respects the craft of Nas and Nipsey Hussle. So it’s easy to see that he and his music can only be great because the DNA of his sound has intertwined with the likes of those before him.

You can check out videos of this lyrical mastermind on YouTube. YouTube building a one-stop streaming video store. Also, follow him via Instagram @day_parkay to stay updated with show dates and more! And if you’re really ready to ride with him, look him up on DatPiff and choose your favorite song from either mix-tape. No matter what you choose, you can’t and won’t go wrong. But just remember the name and the music.