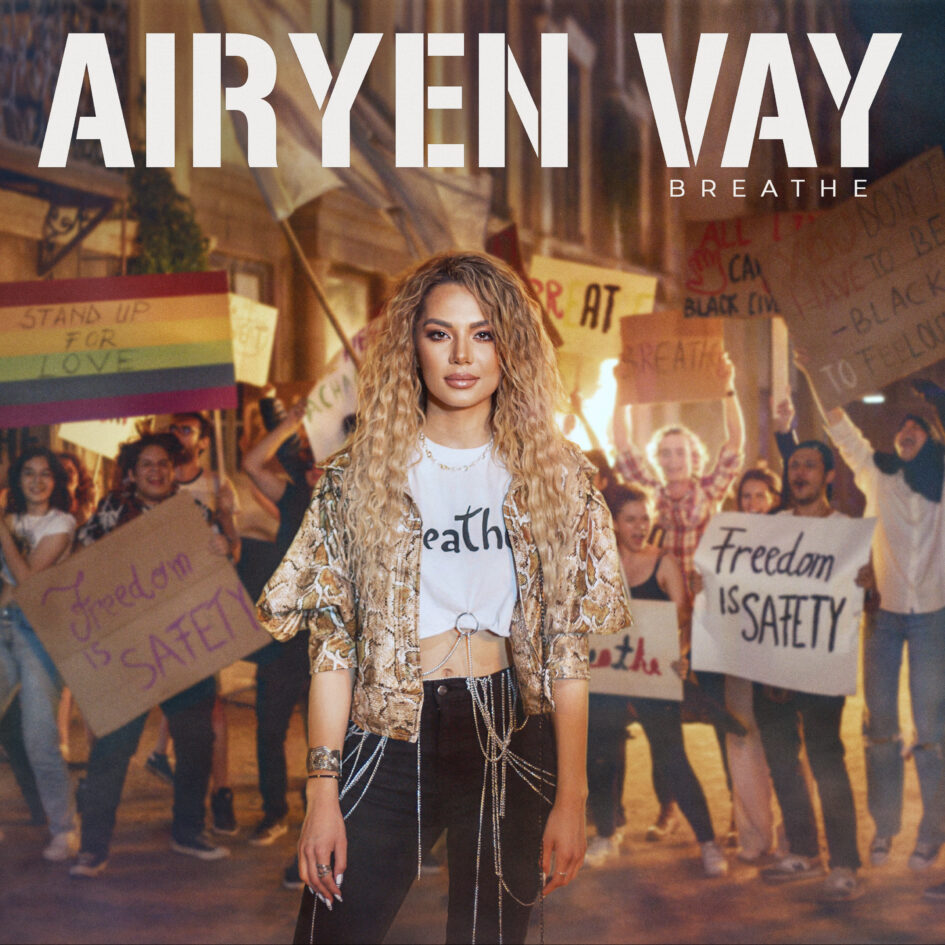 Rising R&B Pop singer Airyen Vay returns with a powerful and emotional new single, “Breathe,” that drops on November 12 along with an official music video featuring celebrated actress Maia Morgenstern. In the forthcoming video for the self-penned anthem “Breathe,” Airyen encourages the world’s youth to make their voices heard. Perhaps her most ambitious project to date, Airyen Vay hopes that “Breathe” can inspire listeners to bring about positive change in the world. The singer delivers a stirring vocal performance that will resonate with listeners who feel trapped by the expectations and beliefs of those around them. Through her uplifting and infectious pop vocals, she encourages youth protest and younger generations to bring about positive change in the world. “At its heart, this track is about fighting for what is right, no matter what controversy it may cause or how others around you might react to it,” says Airyen. “Make your voice heard is the message.” Throughout the song, she continually uses the chorus to plead with listeners to just “breathe” and not allow themselves to be suffocated by a fear of upsetting others. To better share this song’s powerful message, she recruited actress Maia Morgenstern to star in the “Breathe” official music video. Playing the role of Airyen Vay’s mother, Morgenstern, fights with her impassioned daughter, who wants to join other members of her generation as they march in protest past the family’s bakeshop. Despite her resistance, Morgenstern’s character soon realizes that it is not right to stop her daughter from speaking out. On a deeper level, Morgenstern fills the role perfectly as she experienced considerable real-life criticism and backlash for playing the role of Mary in the box office smash The Passion Of The Christ (2004). Describing her experience filming the “Breathe” video, Morgenstern stated, “So true, so real and so meaningful…This video is like a movie, a true-life story. A conflict between generations and limited situations between parents and children. There is a feeling of not being heard and seen by some of the most important people of our life, your mother or your child. Me and Airyen exchanged ideas in the most creative way. An ideal connection based on admiration and respect shared by both of us “I wrote the chorus of this song two years ago in the middle of a panic attack. I was alone and didn’t know what to do, so I started singing to calm down. The inspiration for verses came at the beginning of this year, and this is how the song was born” says Airyen. “ It was truly an honor…she is someone that I will always look up” says Airyen about working with Morgenstern. “Breathe” is streaming now on global music platforms, including Apple Music, Spotify, and Amazon Music, among others. Additionally, fans can stream the official music video for “Breathe” directly on YouTube. Perhaps her most ambitious project to date, Airyen Vay hopes that “Breathe” can inspire listeners to bring about positive change in the world. “Breathe” was created by an impressive collection of talented individuals, including lyrics and music by Airyen Vay herself. Douglas Martung produced the song, mixed/engineered by Derek Ali and mastered by Chris Gehringer. Airyen Vay is a native of Botosani, Romania, and is currently based in Los Angeles, California. As an aspiring young pop/R&B artist, she has already begun to make a name for herself with hit singles like “SAY” (2019) and “Love Me Like You’re High” (2021). To date, each of her projects has displayed a talented young artist with a unique inner voice that is distinctly edgy, powerful, bold, and authentic. Even more impressive is that Airyen Vay is never afraid to use her music to speak to pressing world issues and themes of love, equality, and inner peace.