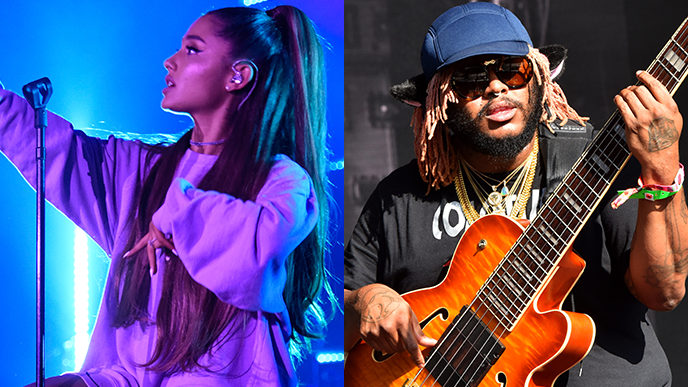 Two years ago, on September 7th, influential rapper, Grammy owner, talented songwriter and record producer Mac Miller passed away. The reason was an accidental drugs overdose. It was the immense pain for his friend, musician Thundercat. Mac Miller was an incomparable mentor and collaborator for the singer and after rapper unexpectedly died at the age of 26 – it was hard to believe it. It was also a considerable loss for Miller’s ex-girlfriend, famous pop star Ariana Grande, despite numerous accusations of Grande in his death. The 27-yeaar-old singer speaked up about the horrible occurence many times, and every time she emphasized his kindness and talent, but said, that unfortunately, she couldn’t help demons in his soul.

In this way, two artists are deeply connected through Mac Miller. They performed in duet, on Friday, November 13th, singing single “Them Changes” from Thundercat‘s debut album “Drunk”, song about unhappy love and inner void of loneliness.

Grande made a surprise to her fans on Adult Swim Festival, as nobody expected her to rise on the stage. The viewers marked that their version of this emotional song was shrill and beautiful. Fans are already insisting on collective album of prodigious stars. Both agree that it was a serious step on the rocky road of grief.

Thundercat admitted during the interview that he felt that common connection with Ariana. He also said that it was the beginning of the healing process.e performance. The artist JD and Domi were also participants of the performance, which caused the burst of praise for the duo on Thundercat‘s twitter.

Comments on the social media included among others “It’s so beautiful to see the two of them keeping Malcom’s legacy” and “Mac’s smiling down on y’all”. Fans were also stricken by versatility of sound and soft back vocals, that complemented the Friday’s performance.

Such notion would be fully justified. Apparently, Thundercat was going to join Miller on tour in support of the album, but he got the tragic news right as they were about to take off, bringing their plans ceased unexpectedly.